As a former astronaut, Mark Kelly has witnessed the deforestation of the Amazon from space and knows firsthand what climate change can do to the planet. Kelly also recognizes that Arizona is at the center of the climate crisis — with the state at risk of increased heat and drought that disproportionately impact low-wealth and communities of color.

But Kelly also understands that there is a great opportunity for Arizona to lead in the transition to a clean energy economy that creates good-paying jobs and safer, healthier communities. In the Senate, he will fight for meaningful limits on harmful carbon pollution.

During her time in Congress, Arizona Senator and 2020 Dirty Dozen member Martha McSally has earned a lifetime LCV score of just 7%. Arizona families breathe some of the worst air pollution in the country and Arizona communities, especially communities of color, are at an elevated risk of health complications from that dirtier air. Instead of fighting for affordable healthcare and cleaner air for Arizonans, McSally has opposed the Affordable Care Act and protections for pre-existing conditions at every turn, supported Trump’s rollback of the Clean Power Plan which would put no meaningful limits on carbon pollution, and has taken over $650,000 in campaign donations from the corporate oil and gas industry. McSally’s full anti-environmental voting record can be found here. 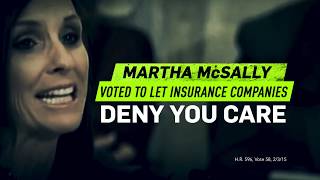