Colorado Senator and 2020 Dirty Dozen member Cory Gardner has earned an 11% lifetime LCV score and in the first three years of the Trump administration he backed the president’s extreme policies over 97% of the time. Gardner has taken $1.7 million in contributions from corporate polluters. He consistently votes against clean air and clean water protections, voted to undermine NEPA, voted to cut the Environmental Protection Agency’s budget by a third, and, despite recent attempts to look good in an election year, has a record of selling out public lands. Gardner refuses to support the bipartisan CORE Act which would protect 400,000 acres of public lands in Colorado and did not oppose Trump’s nomination of anti-public lands bigot William Perry Pendley to head the Bureau of Land Management. Gardner’s full anti-environmental voting record can be found here. 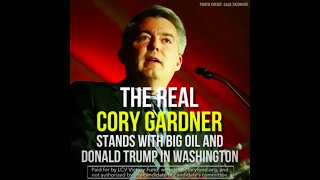 Washington, D.C. —Cory Gardner put out a new ad claiming support from environmental groups and his commitment to public lands. But the ad ignores the...