Virginia State Delegate Nick Freitas is running against LCV Action Fund-endorsed Rep. Abigail Spanberger in Virginia’s 7th congressional district. Freitas has repeatedly voted against taking action on the climate crisis and protecting our air and water from toxic pollution. During his time in the Virginia State legislature, he voted against banning fracking and offshore drilling and against protecting drinking water from PFAS. He was the deciding vote blocking a bill to update the sixth-grade science curriculum to include the benefits of recycling. He supports Trump’s tax reform plan that gave billions of dollars in tax cuts to big oil companies, has taken more than $34,000 in campaign contributions from the oil and gas industry, and said  climate scientists are unqualified to make policy recommendations. Freitas has a 31% lifetime score from Virginia LCV. 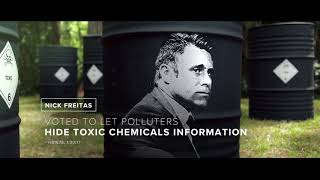