Incumbent Rep. Richard Hudson has a 2% lifetime score from LCV. He is on the record saying he does not believe that human activity contributes to climate change. He has received over $30,000 in campaign contributions from Duke Energy’s PAC, the same corporation whose power plant dumped 40,000 tons of coal ash into the Dan River. He has voted against protecting clean drinking water, threatening the public health of over 117 million people.

In addition to his poor environmental record, Rep. Hudson missed nearly half of House votes in July and August of this year, and his overall attendance record while in Congress is much worse than the median among representatives currently serving. When he actually showed up to work, Hudson voted for Trump’s tax reform plan, which would raise middle-class taxes and add $2 trillion to the deficit, while cutting taxes for millionaires and corporations.

× received over $30,000 in campaign contributions from Duke Energy’s PAC 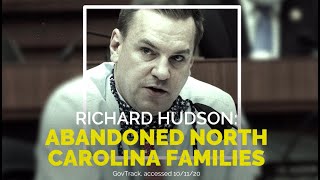